Visiting Bletchley Park is something I wanted to do for a long time so I was delighted when the opportunity arose to go along and see ‘The Home of the Codebreakers’ for myself.

The thousands of people who worked tirelessly at Bletchley Park dramatically affected the outcome of World War 2. It is estimated that their work shortened the duration by the war by at least two years. There is no telling how many lives these hard working people saved.

We started by taking a walking tour round the grounds. The incredibly knowledgeable guide really gave us a feel for what it must be like to have worked at Bletchley during the war. The conditions were far from ideal.

By 1943 there were nearly ten thousand people working 24/7 on eight hour shifts. There was no central heating, and with rationing in effect food was scarce. Nearly everyone smoked in those days which would have created very unpleasant working conditions. Not to mention the fact that as soon as night began to fall lights had to be kept to an absolute minimum because of the blackout. In the huts containing the Bombe machines (used to help decipher the codes) and Colossus machines (the world’s first computer) the noise would have been relentless.

Step Back in Time at Bletchley Park

Visiting Bletchley Park really is like stepping back in time. Great care has been taken to help you immerse yourself in the experience. Small speakers are situated throughout the grounds. More than once I stepped out of the way of a truck I thought was behind me. In reality, no vehicles allowed on the grounds. We also heard Spitfire aircraft and the sound of voices outside. You can see – and hear – the codebreaking machines at work. Patient guides spend ages explaining exactly how the machines were set so the codes could be broken. 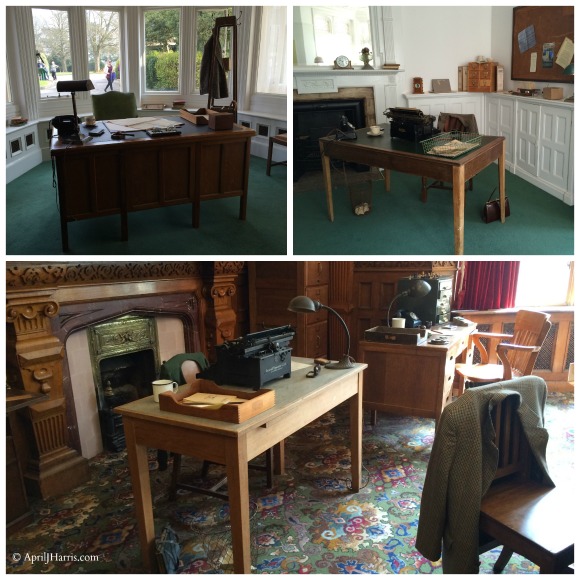 The buildings have been dressed to make it look as though it is still wartime – and as if the people working there have simply stepped away for a moment. A handbag sits by the leg of a desk, a coat is draped over a chair, and a coffee cup sits beside a typewriter. Posters on the walls remind one that “Lose lips sink ships” and “Careless talk costs lives”. Everyone who worked at Bletchley had signed the Official Secrets Act. They were told that if they spoke of what they were doing to anyone that they would be charged with treason. Many of them kept their work secret there for the whole of their lives. They remained silent even after the important work done at Bletchley Park became public knowledge.

What seems like miles of corridor – all of it identical – stretches through the many huts built to house the codebreakers and their equipment. A cup of tea sits on a desk beside pieces of paper covered in half deciphered codes, a pencil resting on top of the paper. A blanket is draped over the back of a chair against the cold. An open packet of cigarettes and an ashtray sit nearby. Recorded telephone conversations (voiced by actors) play out as you enter a room. It feels like you are actually back in the 1940’s, in a Britain ravaged by war and fighting desperately for victory.

The movie The Imitation Game was filmed on site. It’s the story of a story about the work carried out at Bletchley Park, starring Benedict Cumberbatch and Keira Knightley. There’s a fascinating exhibit of memorabilia from the film available to look at. One of the sets – of the bar at Bletchley – was still intact when we visited. I highly recommend seeing the film before visiting Bletchley. It helps you to feel more connected to the people who worked there, especially Alan Turing. Alan was pivotal in the development of the Bombe machines and who also was one of the people responsible for the development of the first computers.

We were so enthralled with Bletchley Park that we almost forgot to stop for lunch. When 5.00pm rolled around we were startled to see the guides begin to encourage us to finish our visit. We simply couldn’t believe the time had flown by so fast. Visiting Bletchley Park is a wonderful way to learn more about the history of World War 2 as well as life in 1940’s Britain. The exhibits are set up so that they are accessible for everyone – so it’s a great place to bring children too. (I would suggest it is best suited to children of primary school age and older.)

Step Back in Time at Nuffield Place

🌸I'm a housewife but NOT a tradwife🌸As a h

What does it really mean – being a housewife in

Today more than ever, it’s so important to look

🌟How do you feel about hats? 🌟It's Nationa

☀️When you change the way you look at things,

Sneaking in dinner for two with @guyjharris66 at o